A Toilet Paper Subscription Business With a Twist

Toilet paper. We all need it, and I expect most of us know the frustration of unexpectedly running out. It’s the perfect example of an everyday item that is ideally suited to a subscription delivery model.

TPFactory is making the most of this common sense business opportunity, but with a twist. Customers can select a charity partner of their choice to receive 5% of their monthly subscription fee as a donation.

I had the opportunity to chat with Lee Jossel, the founder of TPFactory a couple of weeks ago. He shared his experience running this toilet paper subscription business, which is powered by WooCommerce and WooCommerce Subscriptions.

Kirby: Would you be able to tell me the story of how TPFactory came to be?

Lee: Sure, I was at a family function during a holiday, and we ran out of toilet paper. We had about 40 people there.

I had to go to the supermarket and get the toilet paper. It became a big hassle because we were in an event location, so there were a lot of people. It took me about an hour and a half to get some toilet paper.

I thought: “It would be so much easier if we could just somehow get toilet paper delivered to the house.” That is basically how it started.

I had a little conversation with a couple of family members and they said: “Why don’t we do a delivery service?” We went through a lot of different options, and we came up with an internet subscription service.

Long story short, we came up with the opportunity and then the 5% donation factor came in for nonprofits. Because I work with a lot of nonprofits in [another] company I own. 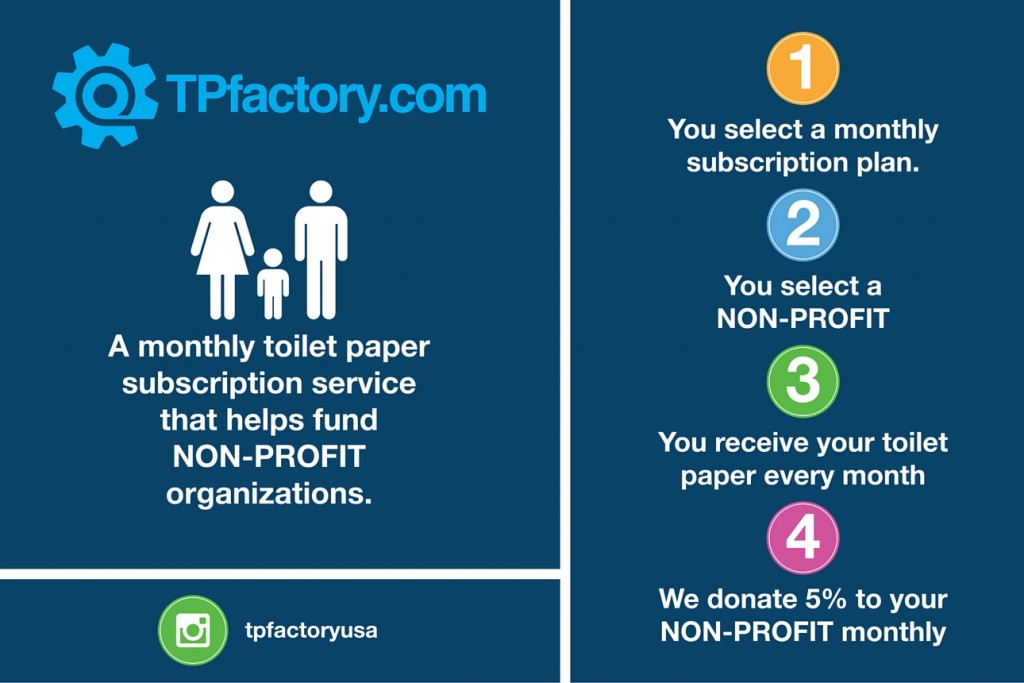 Kirby: Were you inspired by any other individuals or companies?

Lee: You know, I was. The subscription model [was inspired by] Dollar Shave Club. The nonprofits—to give back the 5%—was just based on the environment that I work in and my life.

Kirby: Where are you based?

Lee: We’re based in Los Angeles.

Kirby: It looks like you launched around December 2014, is that right?

Lee: Yeah, we did a soft launch for the website. We not only do web-based sales but also land-based retail, direct from a warehouse.

We haven’t fully launched the web stuff. We’re looking at about 30 to 45 days [as of August 7, 2015] to actually come out with a full launch and get this out.

Kirby: Where did you find your toilet paper supplier?

Lee: We went through many, many different suppliers and samplings. [Some] based in China, [some] based in South Africa, India and the United States.

We came to a discovery that the United States manufacturer would be the best for us at this time, since we’re based in America. We thought that would be a benefit to our marketing plan and business.

We literally sampled over 200 products in toilet paper rolls. We finally came down to one supplier, and it was based on the fact that [what] people wanted [was] all over the board. People wanted single ply, double ply, soft, [from] lots of sheets on the roll to minimal sheets on the roll. We based it on something that was right in the average as far as quality was concerned.

Kirby: Can you tell me a bit more about how you found your charity partners?

Lee: The charity partners [are] based, again, on dealing with my other company. I do a lot of donating and I do a lot of work with nonprofits. We basically reached out to those people. We have a lot of nonprofits that are starting to get onboard because of word of mouth.

For instance, we [work with] a lot of education foundations. Schools nowadays really need a tremendous amount of funding, which they’ve lost over the years. So they’re starting to come onboard.

Of course, it’s a product that everyone needs, and every time we mention it somebody says: “Oh, I can definitely help get onboard with that, so I’ll reach out to somebody.” So word of mouth is really, so far, the best way.

Kirby: Can you tell me a bit about the different plans you offer?

Lee: There are multiple plans. One starts at a six roll, that’s for the budget-minded single person that is not looking to use a tonne of toilet paper. Then we go all the way to corporate, which is a 96 roll. In between it’s a 12 roll, 24 roll, a 48 roll.

The plans themselves cater to the groups that are mentioned on the website.

Kirby: How did you find your first customers?

Lee: Our first customers were friends and family. It was word of mouth. It was basically just getting out there and saying: “Hey we started” and we emailed a couple of people and they said: “Oh great, we’d like to subscribe, or we’d like to get involved.”

Kirby: You said word of mouth is really powerful, but how else are you reaching customers now?

At this time we do have a Facebook account, we work with that. We do email blasts every two to three weeks, to just remind people and we have a couple of people that actually tele-market and make calls. I do [also] have a couple of salespeople that go out there and physically walk the streets.

Kirby: What kind of growth have you experienced since you launched?

Lee: Realistically on the soft launch we had about a 30% increase in about 30 days.

On the subscription level, again because we haven’t launched completely, we see about a 10% increase every 30 days. Not huge.

I’m basing this all on the web stuff. You know, the brick-and-mortar business is a lot better.

Kirby: Regarding the brick-and-mortar business, did it launch at the same time, late last year? Or was it running before?

Lee: We actually ran it just a couple of months beforehand. Once we got our products in line, then we just said: “Let’s get some stock,” and we started selling.

We’ve held back a little bit on the internet based [side of the business], because once we launch we want to make sure that our entire base is set and we have a good foundation. We don’t want to disappoint any customers in not being able to distribute. We have everything [in line] as far as distribution, manufacturing, marketing and operational issues [go]. They’re all there. 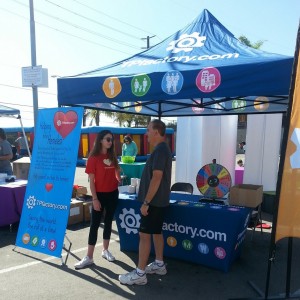 Kirby: How many people are on your team?

Lee: Right now we have seven people. A couple of salespeople, two administrative [staff], myself, and the web company and then we have a marketing company that’s just come onboard in the last couple of days.

Kirby: Have you funded all of this yourself, or did you receive some investment?

Lee: I have received some investment.

I can’t tell exactly who the investors are because it’s a private equity firm. But at the time I did go out and solicit the opportunity.

We did at one time, [try] one of the [crowd] funding websites. It wasn’t as good. Because we have a product that a lot of people see as a basic needs product, as far as investment is concerned.

Once we got everything up and running, of course, we had lots of people asking to invest because of what the program is about and they realise something has come to fruition.

Which is your typical business thing, once you are somewhat successful and [people can] see potential, then people jump onboard.

Kirby: What has been the biggest challenge you’ve faced so far?

Lee: The biggest challenge we face is a pricing to product issue.

A lot of people say: “Well we can get toilet paper for 50c a roll where you’re selling it for $1 a roll. But [we need to] communicate [so that people] realise that our product is a 500 sheet roll of toilet paper, where [elsewhere] they can get maybe 250 sheets a roll. They’re not realising that that roll is priced based on how much paper is on it.

That’s the number one issue that we’re having now, as a pricing issue. If that makes sense?

Kirby: Yes, [do you mean difficulty] communicating to people what the product actually is?

Lee: Exactly. Then another [challenging] factor is shipping. We do charge the shipping cost. We don’t ship for free.

People [who shop] on Amazon or other commodity environments don’t realise that they’re paying for an Amazon Prime [membership, to cover shipping costs], but they’re not paying for it in the order.

Kirby: Shipping often comes up as one of the biggest challenges for anyone who has to deal with it in eCommerce.

Lee: Right. A lot of times people don’t understand when they go to the grocery store, they typically go get all this stuff. They’re spending money and time and gas to do it. Then they realise, once that’s communicated: “You know you’re right, the shipping [cost] is not that much.”

Kirby: Do you have any advice for other entrepreneurs?

Lee: You always just have to push forward and just make sure that if you have an idea, you have to put forth the idea and make it physically work. If you’re going to sit there and do nothing, your ideas will never get recognised and you’ll never be able to do it. So just jump into the pool and start doing it. 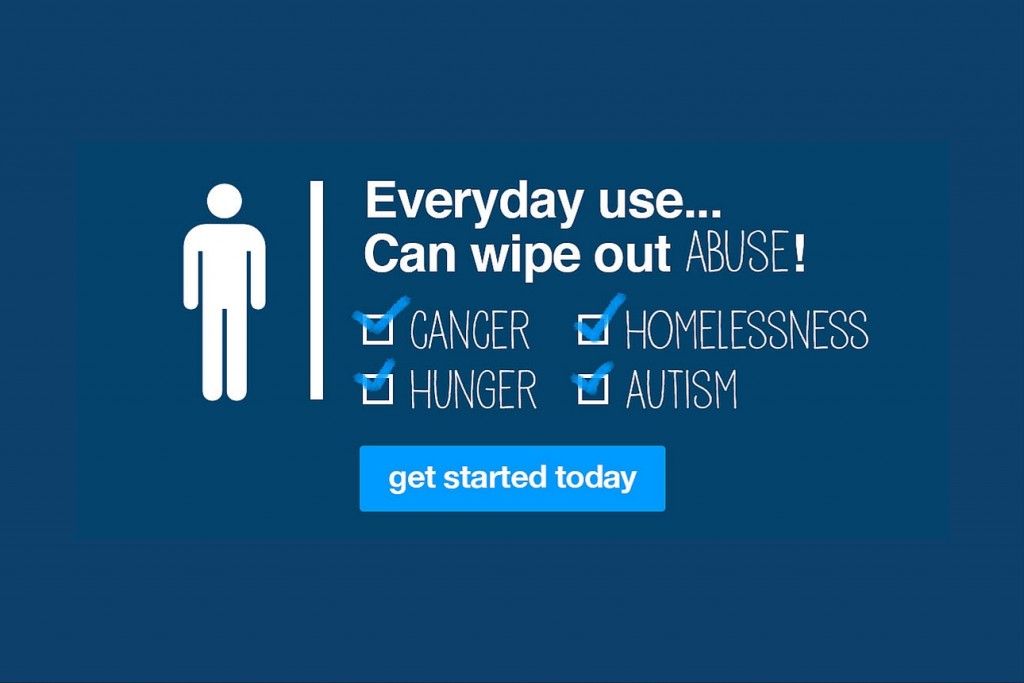 Kirby: Can you tell me a bit more about your plans for the future at TPFactory?

Lee: Well, we do actually have plans to add more items in the product mix. Our main thing is “wiping out nonprofit issues,” which are diseases, homelessness, funding, stuff like that. What we’re doing is adding products that pertain to “wiping.”

So it would be adding wipes, like wet wipes and paper towels, sponges. All those kinds of things that people need.

Kirby: And can you tell me a bit more about what you’ve got planned for the [website] launch?

Lee: We have a very large social media push. That’ll be based on Facebook and Google and then we also have a lot of physical signs and brick-and-mortar stuff that’s going to go out.

Kirby: And just finally, can you tell me a little bit more about the other work that you do, with charities?

Lee: It’s called Exsel Incorporated. We do promotional items. Anything with a name or a logo. And we donate a tonne of signs, t-shirts, caps and all those promotional items. So we’re constantly going out and helping service and volunteering with a big group of people to most of the Fortune 500 or large nonprofits out there. As well as small nonprofits and education foundations.

Toilet paper subscriptions make so much sense, and it’s wonderful to learn more about how Lee and the team at TPFactory are using that opportunity to raise funds for nonprofits and educational foundations.

We wish them every success as they launch their website and social media push and expand TPFactory beyond toilet paper and into other everyday household items!